I wasn’t planning on doing a letter this week.  It was my birthweek and I had other things going on. We were going sledding; I had to take food to the school for Parent Teacher Conferences; Croft had lots of homework to do, and the dinner menu was nothings special.  But as we started the week, Croft used her magic touch. She tweaked and twisted our regular activities and turned the week into T week!

Fish was on the menu for the week so we decided to make talapia to go with our T theme. Chad made a tasty talapia with just a little honey, lemon and purple onions and baked it in the oven at 375 degrees.  The kids gobbled it up. I signed up to bring a dessert for Parent Teacher Conferences a couple of weeks back.  So Croft and I decided to make a treat for the teachers. We also ate tacos, tuna, toast, tortillas and tomatoes over the course of T week.

Traditionally we take the Trax train to the temple to see the tulips for T week.  Here is Crew’s week: 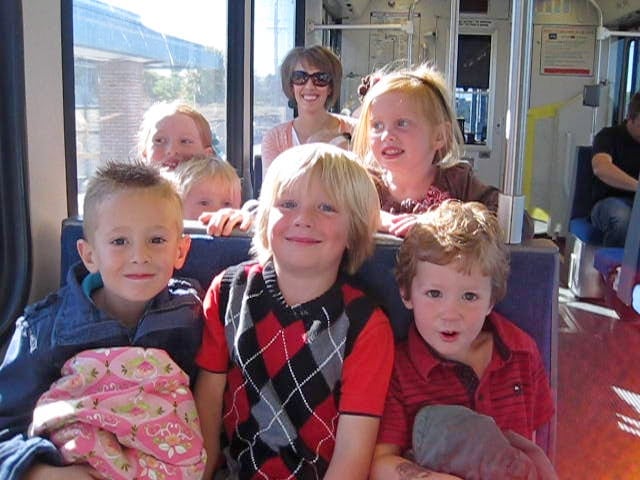 but this time T week hit in the middle of winter, so what to do?  We had planned to go sledding for my birthday and as I was telling Croft she said, “Mom, we are going tubing!”  So we went tubing for T week! And it was extra special because she went tubing with Tiffany. Another day Locke was sick, so we all watched Tarzan together.  When the movie was over we realized that he had picked a T movie:)

I really wanted to try tie dying but I ran out of time.

So Croft wanted to make a turtle instead. She colored a pattern on a paper plate for the turtle shell. Then we cut his head, legs, and arms out of green construction paper and attached the limbs with brads.  She wanted the turtle to be able to hide in his shell. She was thrilled with with the final result. During Table Time, Croft practiced writing her T’s.  We put 100 toppings on a pretend pizza and she made triangles with toothpicks.   All of which were part of her regular homework.

T week ended up being totally unplanned but totally terrific.