You have heard of a Man Cave, well how about an Olympic Cave?

The London Olympics are coming July 27 – August 12 and I plan on retreating to the dark corners of my basement and not coming up for 2 weeks straight.  Don’t call.  Don’t ask me to do anything because I probably won’t even shower.  I am an Olympic junkie.

I still remember Mary Lou Retton getting a perfect 10 or Kerry Strug sticking her landing with her hurt ankle or Michael Phelps out touching his competitor by .01 of a second.

But of course, the overachieving woman in me would feel a little guilty if I actually just sat and watched TV for 2 weeks straight.  So I have to add a little education to my cave to soothe the lazy self  talk that is sure to chant its way into my brain.

First, I pulled out my tacky Olympic sheet that I made years ago with paint and a hula hoop as a template.

Next, I hung it up in my basement. (This is the beauty of renting.  I am much less aesthetically accountable.)  The Olympic rings help create atmosphere.

And did you know that each ring represents one of the 5 continents that participates in the games?

And the rings are interlaced to symbolize the coming together of the countries.   The colors represent the countries’ flags.  Each country has at least one of these colors on its flag.

Finally, I pulled out two large maps.  One of the United States and one of the World.  I got them at Costco several months ago with no idea of how I would use them.

But now I do.  I hung them on the basement wall, and I plan on having the kids mark where different competitors are from.

I might even  write the words to the Star Spangled Banner  on a large post it note so we can sing along with every gold medal.   The learning lessons with the Olympics are endless.

I wasn’t thinking about food as much, but I stumbled across some Olympic food ideas that just might make their way into my Olympic Cave.  Here are some cupcakes from Family Fun: 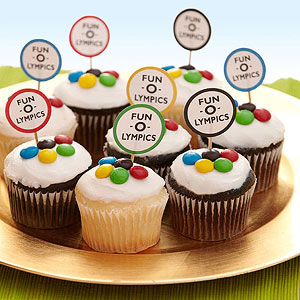 Or darling little replicas of the Olympic torch:

I am so excited to watch the Olympics with my kids in our Olympic cave. Along with cheering and excitement and patriotism, we just might learn a little bit as well. Go USA!!!