Manner #13: Here’s the Scoop on the Spoon 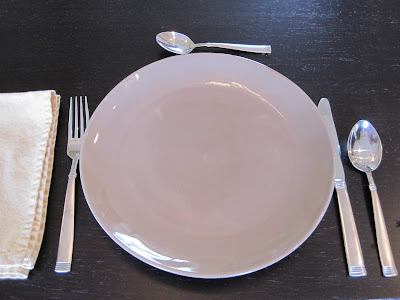 Since we had already learned about the fork and the knife, it was time to learn the scoop on the spoon:

Manner: 1. The spoon-including the soup spoon- will be found to the right of the plate. If a spoon is set above the plate, it is used for the dessert.

2. You hold your spoon like you would hold a pencil- not with a fist.

3. Spoons have limited use compared to the fork and the knife. (I gotta admit I feel kind of bad for the spoon. She is like the fat sister that has little purpose compared to her sharp brother, the knife, and busy sister, the fork.) Spoons can be used to stir drinks like coffee and tea, to eat soft desserts like icecream and pudding , and of course they are used to eat soup and cereal. When I was studying the functions of the spoon, I realized that they would be easier to remember if we noted that the Spoon’s responsibilities fit under the letter S. Spoons are to be used for Soup, Stirring, and Soft Desserts.

4. If the soup is a course and not the meal, then you will see two spoons. The soup spoon is found to the right of the regular spoon. It is usually the outer most spoon. The soup spoon may have a slightly different shape. If you are only having soup, only one spoon would be set. (I will do a more detailed post on just soup later.)

Practice: I served soup for dinner and pudding (from a Snack Pack) for dessert so the kids had two opportunities to use the spoon. My son kept resorting back to the fist hold, so we had to work on the pencil grip.

Follow-Up: Since Jello-O is classified as a soft dessert in my book, I made a a rainbow Jell-O dessert complete with a whip cream cloud later in the week. This was a fun St. Patty’s Day treat as well as another chance to practice using our spoon. Isn’t it cute in the individual trifle dish? (I knew I would get some good use out of my cups.) 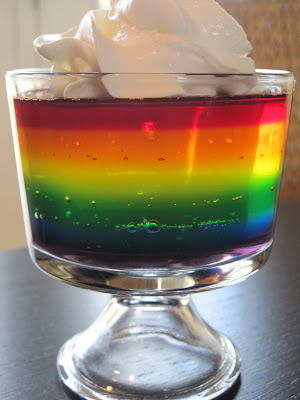 If you have any desire to make this rainbow Jell-O for St. Patrick’s Day here are a few tips:

1. Make sure you have room in your fridge for these to set.

2. I used 6 boxes of small Jell-O. I had to go to a few stores to find blue and I only found it in the big size, so I just guesstimated. I prepared each color as the box directed.

3. I keep a pot of boiling water on the stove that I could just keep going back to for each color.

5. I placed the dishes in a cake pan so I could take them in and out of the fridge easily to add layers.

6. It took about 20 minutes for each layer to set.

7. The boxes made about 10 trifle cups of rainbow Jell-O. So if your family is small, share with a friend.