Can I just say that February’s “Acts of Kindness” Family Challenge was way more fun than January’s “No Eating Out” Challenge? Turns out it feels better to indulge and to give then to starve. Ha!

We learned a few other things during our challenge as well:

We reported our acts of kindness daily as we gathered for family prayer. Counting the acts with conversation hearts was essential to keeping the momentum going. This nightly ritual kept us continually thinking about what we could do to be kinder to others. We were accountable to each other, and the hearts were a visual and verbal reminder of our focus. In our family council at the end of the month we each shared our favorite kindness moment from the month. Here is our report:

Croft and Elle cut out several paper hearts and wrote “Have a nice day” on them. Later Elle had to be two hours early to her dance competition. So while she warmed up, Croft and Chad went out in the parking lot of the high school and tucked the hearts under people’s windshields. They felt so sneaky.

It was February 29th and I wanted to end our Kindness month with a bang. I decided we should do a donation to the local food bank. Since it was a Monday, we made a family night of it. We went shopping at a grocery store and bought the groceries (and donuts). The highlight though, for me, was that each child had to pitch in their own money to pay for the food. They pitched in $5 each and I let them decide what food they wanted to buy with their money. I had asked earlier via Facebook and found out what foods the pantry was short on so the kids could make better choices. One child was crying when I first proposed the idea (he is saving for a new video game), but the other kids convinced him that it was the right thing to do. I was actually surprised by how willing the other kids were to give of their own money. Chad and I used our own fun money as well; we just didn’t take it from our grocery budget. I wanted us all to feel a sacrifice.

We delivered the food yesterday and the manager of the food pantry took us to the back room and showed us how it all worked, explained the process, and answered our questions. It was a humbling, eye-opening experience and gave us more ideas for future service.

We invited all the single and widowed ladies in our church and neighborhood to breakfast ov Valentine’s morning. Elle made the  invitation. We all delivered them. 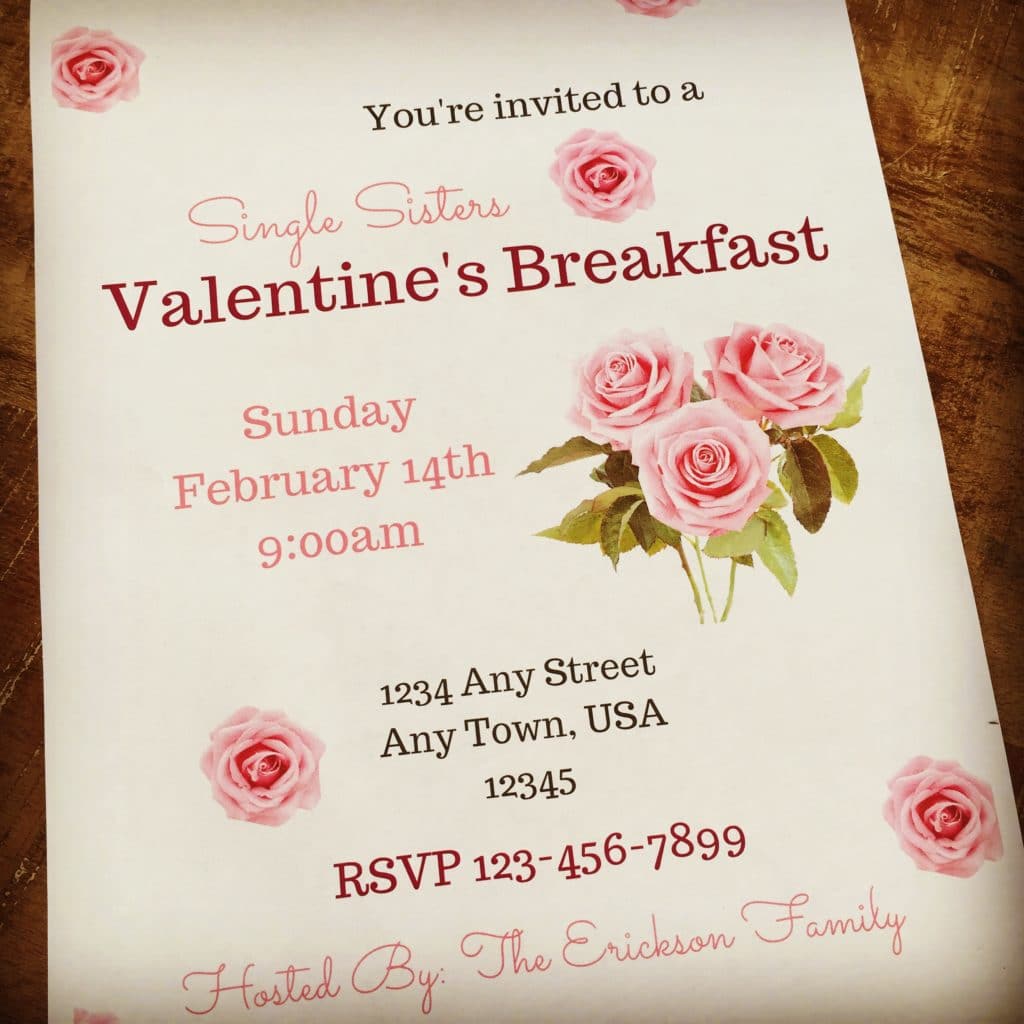 I made cinnamon rolls and Chad made breakfast casseroles. We had a fruit plate and a variety of beverages as well. I had the ladies go through a line so they could get exactly what they wanted on their plate, but then I had my kids serve them their beverages. Many wanted two (like hot chocolate and water) so the kids got a real chance to serve the ladies. We had a nice conversation and good food. The ladies were all so grateful. As they left, we gave each sister a long stemmed rose to take home. We have many new friends in our ward now.

CREW: Paying for a meal.

After a busy Saturday of dance competitions and basketball games, we hit In-N-Out for lunch on our way home. It was then that we decided to pay for the car behind us in the drive-thru. Chad looked in the rear view mirror as the guy pulled to the pay window. The guy was so confused and we all had so much fun trying to see his reaction. It feels good to make someone’s day.

We went to a soda/cookie shop, and we paid for the lady’s drink behind us. Then Croft wanted to leave an extra big tip in the worker’s tip jar. She tipped with her own money.

We had a nice Valentine’s dinner with cousins and then we made all kinds of paper hearts with all kind of messages on them. I think there was even a “You’re hot!” in there. Then we went and heart attacked grandma and grandpa’s door. We let them be surprised for a minute before we ambushed their house. We brought dessert to share with them. They were thrilled to see us.

Overall, February’s Family Challenge was so FUN! We felt good and I know we helped others feel good as well.